Labégude was created in 1835 and took its name from a fountain, which was used as a drinking break by horse travellers and stagecoaches.

Currently, our little city has 1393 inhabitants, number which has increased for 3 years, and is surrounded by a nature both wild on its heights, and in the bank of the river which borders it.

Labégude became an important industrial site for local economy, in particular after the Second World War. Some big companies were born in this village, for example:
– The family business, SABATON company, created in 1907 at the Terminus hotel, confectioner, now in activity in Aubenas, makes candied chestnuts, chestnut cream jam, and many others delicious specialities!
– A glass factory, founded in 1885, result from the union of Boussois, Souchon and Neuvesel, specialized in bottles manufacturing and glass products. Previously named BSN, now the site belongs to O-I Manufacturing group‘s, and is the most efficient glass factory in Europe.

Now, you understand better why a logo with a chestnut and a glass-blower.

Many shops and amenities will improve your daily needs.

So…do you guess now why Labégude is an important hotspot and a precious junction in southern Ardèche?

Indeed, this village started out as a meeting for travellers, and remains a fundamental link between local people, economy of this geographic zone, and several main tourist sites, like Aubenas, Vals-les-Bains, and the road towards le Puy en Velay.

Labégude, its citizens, its mayor and its elected municipal officials are doing their best to develop and to improve daily life, for residents or people on holiday who pass through. 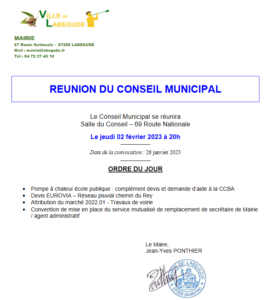